Wouldn’t it become cool to become a psychic? How would you like to connect with strangers and make new friends faster, Or perhaps you’re into business or there’s just someone you want to impress. Well then here’s 12 Cold Reading techniques from Ian Rowlands book, “The Full Facts Book of Cold Reading.”

Golden Rule: YES AND, NO BUT. This means if your prediction or guess is correct or even just a maybe, simply say “And” or just keep going and add on. But if your predictions misses, say “But” and then give an explanation or just make another guess. With all my years of Cold Reading this is the most important rule that has helped me.

You: “I can tell you’re an independent person”
Person: “Definitely”
You: “And based on our conversation, you know I can tell that you like to lead more than follow”
Person: “I guess…. sometimes”
You: “Yes and I have a feeling that you’re more confident than most people “
Person: “not really”
You: “Ahh, but I’m sure you can be when you’re doing an activity that you love to do”
Person: “You’re right”
|

Vanishing Negatives: Learn this technique and  you will never ever be wrong again when asking a question that prompts a yes/no response.

To do this, simply reformat your question to include a negative word like “not” or “don’t”. And if you get the question right, then simply say something like, “Yeah that’s what I thought.” And if you get you get it wrong, simply say, “No, I didn’t think so.” Here’s an example:
Instead of asking, “Do you work for yourself?”, say…
“You don’t work for yourself do you?”
No I don’t.”
“No, I didn’t think so. … cuz you don’t seem to be cut out to be one of these flashy, egocentric entrepreneurs, with all that stress and the hassle. Most of them never get anywhere anyways!”
Now for the other scenario.
“You don’t work for yourself do you?”
“Yes, I do, actually. Have done for a while.”
|
Barnum Statements: These are statements that are true for most people. Here’s a few examples
EX1: “You tend to feel you have a lot of unused capacity, and that people don’t always give you full credit for your abilities.”
EX2: “Some of your hopes and goals tend to be pretty unrealistic.”
EX3: “You often give yourself quite a hard time over your mistakes and shortcomings which perhaps other people wouldn’t worry about.
EX4: “You have a strong need for people to like and respect you.”
EX5: “You are an independent and an original thinker; you don’t just accept what people tell you to believe.”
Now remember, if they reject your statement, remember the golden rule. YES AND NO BUT. So if they deny the last example, you could say
“Ahh but this tendency is one you have learned to overcome. You have probably learned how damaging it can be to be too self-critical, and respects and all the credit to you for having matured.”
|
Rainbow Ruse: These are statements which credits the person with both a personality trait and its opposite. For example:
Ex1: I would say that on the whole you’re the quiet type. but when the circumstances are right, you can be quite the life and soul of the party.
Ex2: “You can be a very considerate person and very quick to provide for others. But there are times if you are honest to yourself, you can be very selfish
Other good transitions to connect the two opposites are “at other times” and “yet you also have the potential to be”
These work because majority of people’s personalities are not static and changes depending on the situation or environment
|

Fine Flattery: This is simply a compliment that compares the person to the general population.

If I just told you, “You are wonderfully honest!” While this is definitely flattery, some people will become suspicious of this blatant flattery and will simply reject it. Instead, it’s better to say something like
Ex1: You are way more honest than most people I meet”
A bonus tip is to give traits to people that you want them to have, like honesty. Then they’ll have to live up to it.
So if you want to increase compliance, then compliment them that they’re more open minded than most people.
Ex2: “I like how you’re so open-minded, more people need to be like you.”

Ex3: “I’d say you’re a little bit more honest and conscientious than many people tend to be.”

Other reliable ones: being hard-working and diligent conscientious fair-minded warm and loving independent being wise in the ways of the world, a wisdom gained through hard experience rather than ‘book learning’ knowing how to be a good friend

Psychic Credits:  These are character statements which credit the person with some form of psychic or intuitive gifts. The psychology behind this, is that if you can convince people that they’re at least somewhat psychic, then they’re more likely to believe you’re psychic.
Like the previous technique. it’s not effective if you just say, “Hey! You’re a psychic too! or You’re very intuitive.”
Ex1: “I bet you’re probably the type of person who will be thinking about someone, and then next thing you know they message or call you. Am I right?”
For the ladies especially if they have make up on, you can say:
Ex2: “I can tell yore probably the type of person who would do your face and smarten up your make-up for no reason, and then suddenly there’s a knock on the door and it turns out to be someone who you’re glad you looked your best for”
For the men:
Ex3:Your intuitive side means you have a lot more rapport with women than many men, and this is a characteristic which, whether or not you realise it, a lot of women find very appealing about you
|
Sugar Lumps: You can use these when you sense people are being closed minded
Ex1: “You know in some ways, you have become very defensive, almost as if you’re locked up in your own secure little castle.”
Ex2: “You know, you won’t come to any harm if you lower your defences a little. Who knows, you might find a few of the answers that you’ve been looking for”
Ex3: “I really like how you’re more open minded than most people I know.”
|
Incidental Questions: Now some people won’t think you’re a psychic if you ask them direct questions like, “Are you satisfied in terms of your career, or is there a problem?” or “What is it about your health that concerns you?” Cuz a skeptic would be like, “Ugh, shouldn’t you just know you that?”
Instead it’s more slick to add incidental questions at the end of your guesses. Some examples are:
Ex1: “…now why would that be?”
Ex2: “…is this making sense to you?”
Ex3: “…can you relate to this?”
Ex4: “…does this sound right?”
Ex5: “…would you say this is along the right lines for you?”
Ex6: “…this is significant to you, isn’t it?”
Ex7: “…you can connect with this can’t you?”
Ex8: “…so who might this refer to please?”
Ex9: “…what might this link to in your life?”
Ex10: “…what period of your life, please, might this relate to?”
Ex11: “…so tell me, how might this be significant to you?”
Ex12: “…can you see why this might be the impression I’m getting?”
The point I’m trying to make is that you want to extract information from people without them realizing it. And your inflection and tone of voice will make a big difference to the success of this illusion. Now a more advanced way is to ask questions that are ambiguous in the sense that it can possibly be misinterpreted as a statement. For instance, “Now you seem like someone who likes to do things their way, this is important to you…” Then simply pause and wait for them to say something.
|
Sherlock Strategy: This is extracting information by observing the person, and then making guesses. For example: If you observe someone has long even nails on their left hand but short nails on their right hand, you can make a guess that the person not only plays the guitar, but is left handed. Now of course, don’t reference the observation you made, make up some other vague reason instead.
Ex1: “You don’t seem to think like most people. I bet you you’re left handed.”
For more Examples Click Here
|
Likely Predictions: These are predictions that have a high chance of happening in the near distant future. Some examples are:
Ex1: “Within the next year, you will receive an unexpected contact form someone you haven’t heard from in a quite a while.”
Ex2: “In the year ahead I can see an accident involving you, or a member of your family, and broken or falling glass.”
And the cool nature about future predictions is that no one can really accuse you of being wrong at the present moment. And often times if they don’t come true, they’ll forget about it. But if it does come true, you will be remembered and they might surprisingly contact you.
|
One Way Verification Predictions: These are predictions that you can never get wrong, because people can only verify them if they become true. It’s my absolute favourite. Here’s an example:
Ex1: “Someone you like is going to ask you out tomorrow, but may decide at the last minute not to do so due to shyness”
See if it actually happens you’re psychic, but if doesn’t happen, well you’re still right cuz she was shy.
Ex2: “The end of the world is coming,”
Ex3: “if you pray hard enough it’ll come true”
|
Unverifiable Predictions
Another ruse employed by psychics is to make predictions which the client can never verify either way. Here is an example:

Ex1: “Someone you know will secretly harbour some grudge or ill- will against you. They will plan to put obstacles in your way, but you will overcome their plans without even realizing it.”

Take a moment to study the careful wording used here. You will see that the client cannot possibly know if it ever comes true or not. Here is another: 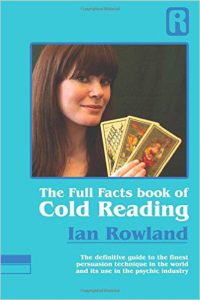 ► The Full Facts Book Of Cold Reading – Ian Rowland
Liked it? Take a second to support PositivelyBrainwashed on Patreon!